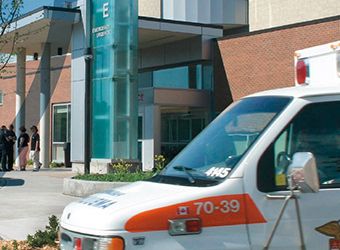 This was one of the biggest communications projects we’ve undertaken, and it was a success from start to finish. Through Compugen’s integration efforts, we were able to initiate a slow migration of our telephony environment, allowing us to manage costs and minimize disruption to hospital staff.

In a medical setting, handling in-the-moment decisions and facilitating immediate consultations requires that doctors, nurses and other healthcare professionals be in touch and accessible regardless of their location in the facility. In the course of modernizing and expanding its operating room environment, QCH discovered that its aging wireless telephone system, which was increasingly unreliable and expensive to maintain because it was no longer supported by the manufacturer, would not support the hospital's expanded needs.

"We had been 'bandaging' this system for some time," said Kevin Farias, Network Technical Analyst at QCH. "But with the expansion, we could no longer continue that approach, and there was no practical way to add new features we wanted."

QCH chose a proposal by Compugen to replace the legacy wireless phone system with a new solution based on Cisco's Advanced Wireless LAN architecture. The solution, which was built on QCH's existing Cisco IP data network, included adding a Cisco Call Manager IP telephony platform that integrates with the current PBX switch via Unified Communications Manager, and Unity Voice Messaging for voice mail. In addition, Cisco Aironet Access Points and Cisco wireless LAN controllers and wireless handsets were installed based on a wireless site survey conducted by Compugen.

"The solution best met our system functionality and cost selection criteria and fit with our vision for full wireless deployment – voice and data – throughout the hospital," said Julie Simpson, Director of Information Systems & Technology at QCH.

The new Cisco system met QCH's urgent need for wireless telephony, while providing a scalable platform that is allowing them to move forward with their networking strategy of wireless voice and data in the OR and throughout the hospital. In addition to the improved wireless capability, the new Cisco IP telephony platform that Compugen also installed provides the voice mail and unified communications capabilities QCH needs, along with numerous advanced call management features. The redundancies designed into that platform provided a solution to the failover concerns that a 24x7 acute-care facility such as QCH has that were not being met by their previous telephony technology.

"We had a very limited window of time during construction to install all the components to support installation, but Compugen dedicated sufficient and specific resources to ensure we succeeded." said Farias. "Through Compugen's integration efforts, we were able to initiate a slow migration of our telephony environment, allowing us to manage costs and minimize disruption to hospital staff."